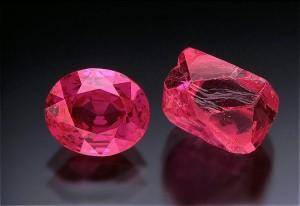 Ruby  (from lat. rubens, rubinus — red)Ruby is one of the most expensive jewels. It occupies the second place on hardness after diamond. The jewel gets its color due to the chrome impurity.The preference is given to the Asian rubys. They are exported from Myanka, Thailand and Sri Lanka. Rubies from East Africa, from such countries, as Kenya and Tanzania are in demand as well.

There are following groups of defects of cut rubies:

Ruby is the jewel of love and passion. It is the symbol of power and force. Ruby is considered to confer its owner the force of a lion, fearlessness of an eagle and the wisdom of a snake.